Why I Don’t Cancel Worship

With Hurricane Florence blowing through North Carolina and area congregations canceling worship, I was recalling a conversation from when I was young and fairly new to the ministry. It was with a man who at the time was my father’s age and a member of my congregation. He was touting the liberties our military has kept for the citizenry of the United States. In particular, our freedom of worship.

Perhaps he eyed me as a young, liberal preacher from the northeast and he wanted to be sure we were on the same patriotic page. “You are able to gather your congregation on Sunday morning because American soldiers fought for your freedom,” he said with a somewhat forceful voice.

I nodded in agreement. Though, lacking the confidence that age and experience would inevitably give me, I didn’t say what was on my mind. I didn’t say that even if this freedom had been taken away, I would hope our church would still gather.

The assumption was that we can worship because we live in a democracy that gives us such freedom, when in fact we worship because it is what the Lord requires. That we can or cannot is hardly the issue, permission from the government being extraneous. The Lord, who made heaven and earth, rules the world, transcending any edict that a temporal power would mandate. Christians gather on Sunday even under the most oppressive governments. The many imprisoned and tortured Christians in North Korea come to mind.

I often wonder if the Methodist Church still produces Christians this bold. We once did, sending out missionaries under the most adversarial of circumstances. Stanley Hauerwas, a Christian ethicist and retired professor at the Duke Divinity School, once wrote, “the main political task of the church is the formation of people who see clearly the cost of discipleship and are willing to pay the price.”

Are we still willing to pay the price? How much do we value worship?

It’s in this vein that I rarely cancel Sunday morning worship when we feel bound by severe weather conditions. The point being, if I can in any way help it, we will not be bound. If I can get myself to the church (and most parsonages are located in walking distance), I will unlock the sanctuary doors and welcome people in.

I don’t expect parishioners to disregard department of transportation alerts, or encourage those who are a fall risk to walk on winter ice, but neither will I call off church in the way a superintendent cancels a day of public school. Our purpose is proclamation of the gospel, whatever the forces are against us, governments or nature.

When the world is in chaos and people are afraid, Christian witness compels us to gather for worship and be reminded of who’s in charge and where we find our refuge and strength. You pay me to attend trustee meetings and show up for church suppers, but worshiping in the house of God is something I would do regardless. If you would let me, I’d still unlock the church doors.
I recall when Hurricane Hugo ripped through Charlotte in 1989, snapping telephone poles like they were twigs in Mother Nature’s hand. The church was without power for nearly a month, which meant that the sound system, the lights, the air conditioning, and the regal pipe organ that dominates that chancel were not operable. Yet, each Sunday we gathered.

We celebrated communion, baptized my son, and, while trees and utility wires still littered the street, buried one of our dead. We sat close together, and the preachers came out from the pulpit. We were sticky from sweat, we strained our eyes to see the hymnal—yet our praise was no less than before the storm had torn off our roofs and battered our lives. 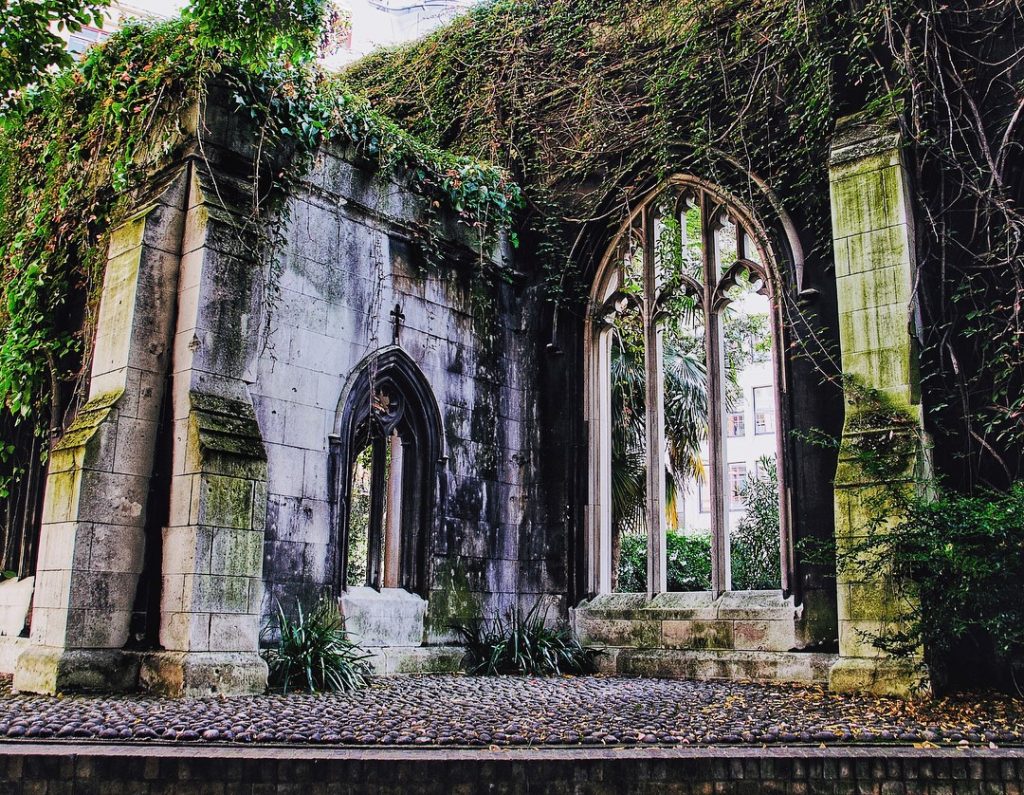 The ruins of St. Dunstan-in-the-East, a Church in London devastated in 1941 by the Blitz. Following the bombing worshipers returned to worship. The site is now a public garden.