While away last week, a relative asked me what I did for a living. Let me clarify, she knows that I am a Methodist pastor, but that didn’t tell her how I spend my days. What does a pastor do? The joke among family is that I have the easiest job, one day a week for twenty minutes. They are referring to the sermon of course, my most visible duty. But laughs aside, she had a legitimate question, and one that even my parishioners may struggle to answer.

I could tell her that I make disciples, but that would be as unclear for her as when a young upshot told me he was a salesforce technical architect. “A what?” I asked. I work for a bank, he said. Still, I have no idea how he spends his days. I picture him in his well-fitting, spiffy suit, in his skyscraper office, building a Lego tower. I want that job.

After hemming and hawing, and falling over my words, I told her that I build Christian communities. I said, “like we have our family that is created through marriage and birth, the church family is brought together by people who want to follow Jesus.” I was about to explain baptism and church vows, but she had already begun to nod with understanding, and with nephews and nieces creating mayhem in the background, I decided to quit while I was ahead.

My relative understood community and the need. That much is innate. It didn’t matter that she swore off the church when she was 16 and never went back. Every one of us want to belong and to be in the company of others where we are known and loved.

With this understanding of church and my role as pastor, my thoughts have been on the recent report from the Center for Disease Control and Prevention. The last eighteen years has seen a sharp rise in suicide, with increases irrespective of age, gender, race and ethnicity. The report notes that “In more than half of all death in 27 states, the people had no known mental health condition when they ended their lives.” Further noted, the increase is most pronounced in rural counties and once industrial regions that have been economically hulled out by the seismic shift in manufacturing.

From my vantage point, the findings from the CDC and the gradual decline of the church attendance are inseparable from the loneliness that pervades our towns and rural communities. Suicide is the symptom of the detachment and isolation that has come to define our time.
For many of us this may not be apparent; we have our family and friends that we have been nurturing for the last fifty years, but we have neighbors trying to make it on their own. I have met them and so have you. Could it be that God was apparent in the good times, but when they realized that the former way of life was not coming back, and home life started to unravel, there was no Christian community to help them carr

We neglect our congregations, civic groups and family ties at our peril. We have gaggles, herds, flocks and faith communities, because none of us were created to live on our own.

I’ve read recently that the decline in the house sparrow, has at least in part resulted from the overuse of insecticides and from the loss of insects they ate. At 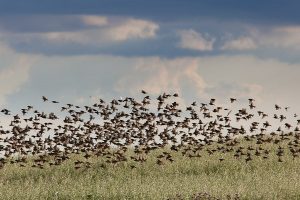 some point they lost their critical mass. House sparrow are the most social of birds; think Mary Poppins and her song “Feed the Birds”. There was a time they could be found by the hundreds, “squabbling flocks of them would cluster on the shoulders and arms and palms of folks” feeding them in the park. The problem, ornithologists believe, was ultimately a psychological one: “the birds, which were so strongly social, felt that life in such low numbers was no longer worth living.”

We are like those birds. And if you ask me how I spend my days I will tell you, that I create Christian community, hoping none of us have to fly through life alone.